CALIFORNIA’S PROP 16 COULD END STRUCTURAL RACISM IN THE STATE

Proposition 16, a measure on the Nov. 3 ballot in California, could end structural racism by allowing affirmative action policies which take race and gender into consideration for public university admissions, government contracts and public employment.

Promoters of the initiative say that its approval will help remove policies that have fed racism in the state for more than 20 years, by improving opportunity gaps for Californians.

Three proponents of the measure spoke Sept. 18 at a briefing organized by Ethnic Media Services. “Proposition 16 deals directly with the issue of systemic racism,” said Eva Patterson, President and co-Founder of The Equal Justice Society, a national legal organization focused on civil rights and the fight against discrimination. “With affirmative action we will have more access to higher education, better jobs, better health insurance and even more access to public office,” she asserted.

This is in contrast with the ballot measure Proposition 209, which was approved by California voters in 1996. Prop. 209 passed with 56% of the general votes, but with extensive rejection by voters of ethnic communities: between 60% and 70% voted no. The ballot measure made it constitutional to prohibit the state from “discriminating or granting preferential treatment due to race, sex, color, ethnicity or national origin in the operation of public employment, public education and public contracting.”

“It had a deceptive label, as if it were a California civil rights initiative,” said Tomás Saenz, President and General Counsel of the Mexican American Legal Defense and Education Fund, noting that Prop. 209 used the phrase preferential treatment instead of affirmative action.

According to Saenz, what Proposition 209 did in California, however, was affect access for people from ethnic communities to educational areas from pre-school to higher education. Nowadays, even though 60% of high school seniors are Black or Latino, only 29% of these races make up the freshmen student body on the campuses in the whole university system in California.

One year after Prop. 209’s approval, the number of Black students in the UC Berkeley School of Law went from 30 to 1.

Saenz noted that the U.S. Supreme Court has ruled that any policy-making public entity wishing to use affirmative action must first undergo a rigorous analysis of existing policy before it considers race and gender for admissions; such policy disallows the use of blanket quotas.

Moreover, the Supreme Court has considerably narrowed the circumstances under which anyone can employ race or gender conscious affirmative action, said Saenz, adding that such restrictions would remain in place in California even if Prop. 16 is passed.

“Some of the most important progress from Prop. 16 may well be in the form of changes that are race-neutral or gender-neutral which result from that rigorous analysis mandated by the U.S. Supreme Court,” he said, noting that new policies could yield positive results for all races and genders.

Prop. 16 may help small business owners increase the number of contracts they receive from the state of California and municipalities in the state. Many Asian American businesses were affected at the beginning of the pandemic by comments made by President Donald Trump when he called COVID-19 the Chinese virus or the Kung flu.

“Since President Trump used these terms, we have documented 2,500 reports of incidents of hatred,” said Vincent Pan, Executive Director of Chinese for Affirmative Action, a social justice community organization headquartered in San Francisco. “Although Congresswoman Grace Meng introduced a resolution against hatred towards Asians (which was finally approved), 164 Republicans voted against the resolution and that is the party which most vigorously opposes Proposition 16.”

In states where affirmative action is legal, Asian Americans have reaped a large share of public contracting dollars from doing business with local and state governments.

“What we are about is acknowledging that we each face different barriers and that we all benefit from removing barriers to opportunity that face any community,” said Pan.

As a result of Proposition 209, women and the ethnic communities have lost nearly $1 billion a year according to estimates by the Equal Justice Society shared by Patterson. The activist said that there have been no incentives for white people to hire subcontractors of other races, which also limits business growth and resources within the community.

But her optimism about Prop. 16 is based on the vast change in demographics in California in the last two decades, to the point that almost 43% of the state’s voters are of a race other than white. Patterson also said that even before the death of George Floyd at the hands of police in Minneapolis, an event that raised solidarity among white Americans, who “took the blindfolds off their eyes to racism,” the majority of them already agreed with affirmative action.

“We have a strategy called validators and villains,” said Paterson about this final stretch of the campaign, noting that supporters of Prop. 16 include singer John Legend, the co-founders of the Black Lives Matter movement, vice presidential candidate Kamala Harris, and many professional athletes in the Bay Area. 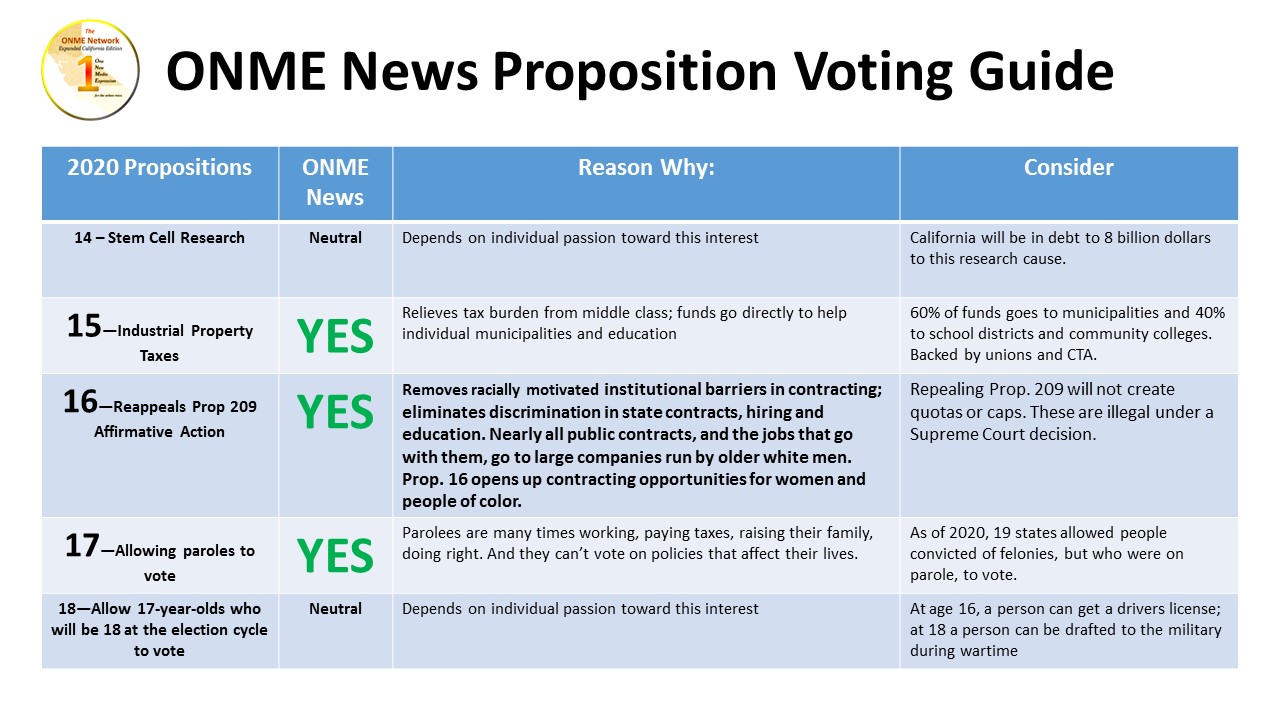 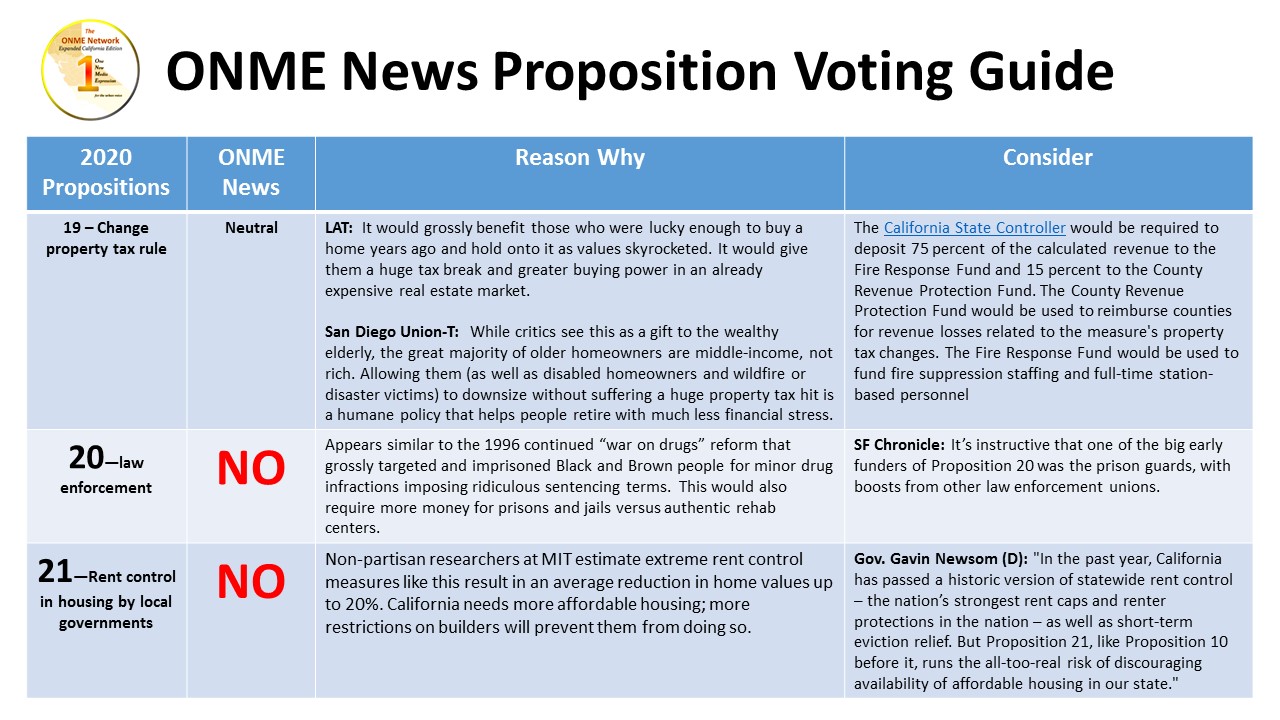 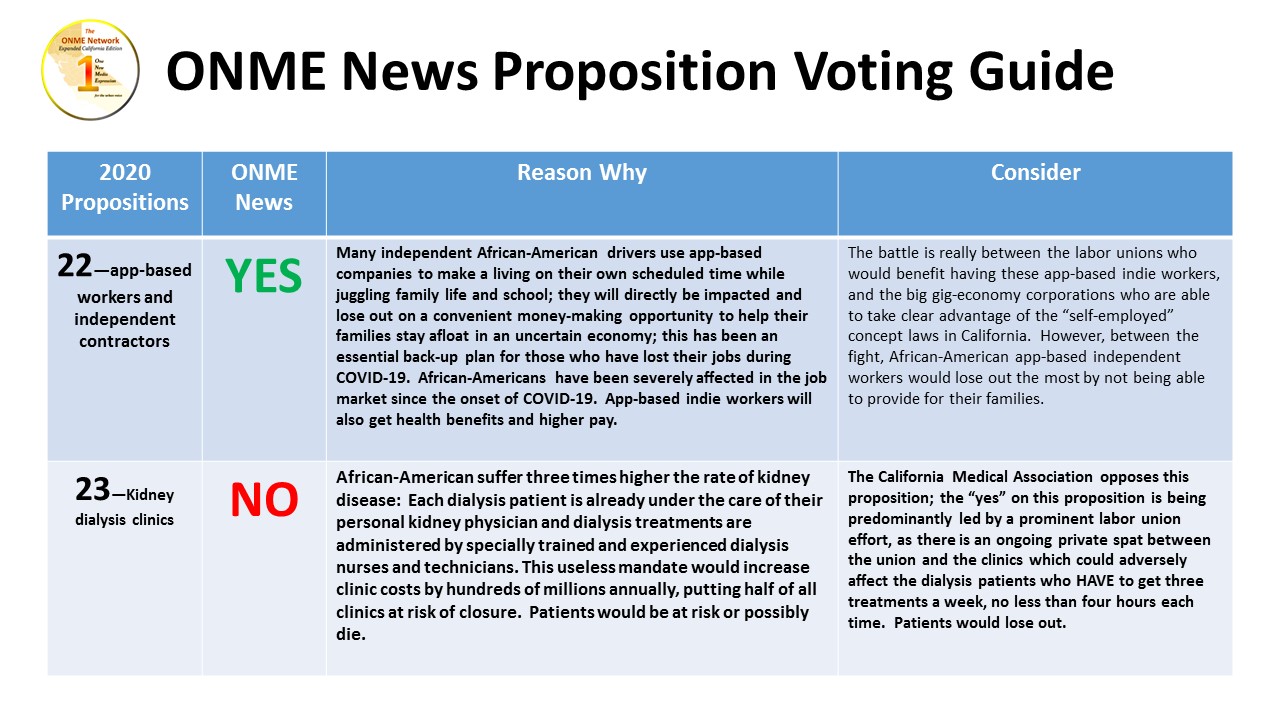 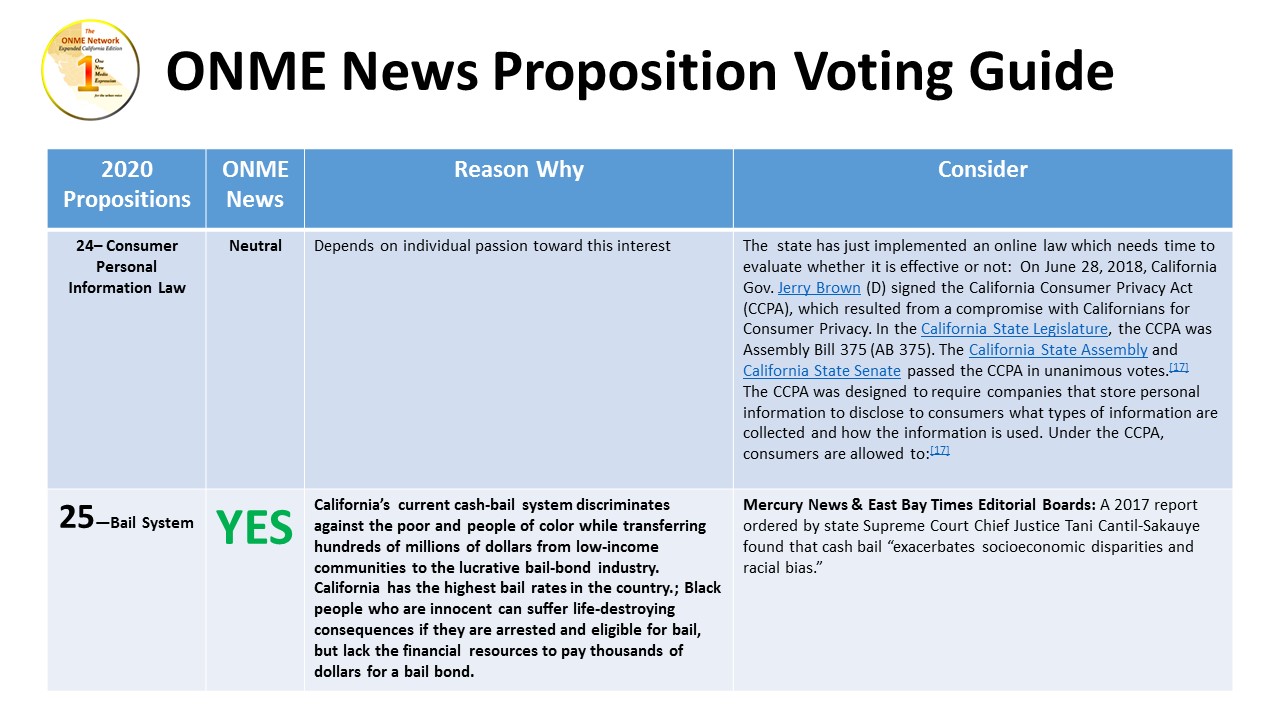 Proponents of Prop 16 argue that it would create targeted opportunities for Black and Latino communities and help to correct centuries of economic exclusion and institutional racism. They also argue that the measure is a way to address the racial wealth gap in California, a state where White Californians make up 60% of high earners though they’re only 37% of the state population.

Opponents of Prop 16 argue that the change would make race more important than merit in college admissions and employment processes, a form of reverse discrimination.

For more information on the propositions visit the California Secretary of State Website: https://www.sos.ca.gov/elections/ballot-measures/qualified-ballot-measures

On Your Nov. Ballot: Proposition 20 calls for changing some misdemeanors to felonies